Every parent dreads to hear the word "cancer," but cancer has a high prevalence in the United States. Early detection of cancer can greatly reduce the severity of the illness and increase life expectancy. 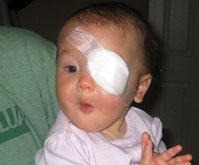 Optometrists diagnose, refer, and comanage cancers that involve the eye area. The most common cancer involving the eye in young children is retinoblastoma. In the United States, this fast-growing cancer occurs in 1 in every 20,000 children, making it the tenth most common pediatric cancer.


Adapted from Hoppe E, Frankel R. Optometrists as key providers in the prevention and early detection of malignancies. Optometry (2006) 77, 397-404